I'm no longer special. And it's great!

When I first had Daisy, I became her world. Literally. Like any parent. When hubby went off to Germany while I nurtured our new baby to be, Daisy and I lived in a little bubble of love together.  When Poppy came along, it was all about keeping them apart for fear Daisy would batter her!  And I became Poppy's world. She wouldn't let me out of her sight for two years! But slowly something changed. They became friends, sitting side by side in their double buggy like peas in the pod. But still, for a long time, they were little selfish beings who just wanted me or daddy. But now, as Ruby has entered the fold - along with a very needy puppy! - our little bubble has expanded and enlarged, its membrane glowing with the colours of a rainbow as the sun shines and warms us.

And I watch an extraordinary thing. Alongside the wonderful connection I have with each of them, I watch how each of my children develops unbreakable relationships with each other - Daisy and Poppy, Daisy and Ruby, Poppy and Ruby. And of course Ruby and her soul-mate, Olly the dog. Now I can step back a little now and watch, mug of hot tea in hand (how many cups of tea have grown cold the last 7 years, neglected while I am pulled away again to give comfort, or respond to need?) and smile as I watch from the sidelines as they fight. bicker, hug, love, laugh, joke, tease, enourage, teach and learn from each other. I am still their world I think, but their universe is expanding and we are all satalites to each other, spinning round each other giving and getting life. 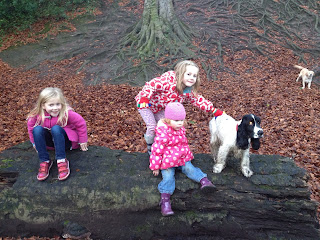 As my brother and I navigate the traumatic and emotional landscape of caring for our parents, our life together stands us in good stead as we steady and support each other (and annoy each other too!).  And so I stand back and see that the beginnings of a lifetime of connections are forming now that will help carry them all through life. And me too. Phew, this tea tastes good hot!
Posted by Mummy mania at 9:48 PM 3 comments:

I've just walked through a riot. Ok, a riot in waiting. I always thought riots were moments of collective spontaneous combustion - a spark of anger / frustration / thuggery / protest - flared by a collective calamatous conscious of intent. But today in Belfast, I saw that in fact it is a premeditated, organised, cautious stand-off gone wrong (or gone right, depending which side of the barricade you are on.)
A riot in waiting. The calm before the storm. The build-up before the explosion.
For weeks I've been watching the cowardly covered faces of youths who know nothing to the life we used to live in 'the old days' - spurred by the 'craic' of the riot rather than a passion for politics. Night after recent night I've watched the news with sadness, disappointment and a little shame that once again the streets I grew up in are being burned by petrol bombs and battered by bricks.
When I come up to look after my mum, I am more emmersed in the news, I shake my head in disgust at these overgrown children acting like violent petulant toddlers throwing a tantrum.
So I'm on my way to get the train back to Dublin, desperate to see my girls. My dad has driven me but I'm keen for him to get home quickly to mum, she can't be left alone for long. So when we see a big crowd loitering (they only loiter with intent in Belfast) I immediately tell Dad to stop. I'll walk the mile or so to go, he needs to get back to mum.
It was only when I got nearer, I realised the crowd was dense and deadly silent. Why oh why am I dragging my daughter's luminous pink wheelie case?  I realise a few of them have balaclavas and scarves over their faces. The side streets have shadows, and small piles of bricks.
Everyone is quiet. There is no noise, apart from the flock of helicopters overhead. Just people watching being watched. Because as I drag my silly fiscia case through the crowd, my heart sinks (further). The road up ahead is blocked by a police barricade of officers dressed in full riot gear, and about 20 riot vans. Behind them half a mile away is the train station.  There was no way through.
Do I agree with the protestors? I honestly don't know. I'm protestant but consider myself Irish. Northern Ireland is half catholic/half Irish and so I can understand why flying the Union Jack all the time upsets them. And I understand why taking it down upsets the unionists. If I had my way, I would remove all flags - apart from religion they have caused more death and destruction than anything else in history.
Anyway, regardless of what I think, any sympathy I might have had went up in the first whiff of smoke from a petrol bomb.
So I drag my bright pink children's wheelie case through the quiet, dense crowd. I avoid a balaclava and speak to a face. How might I get to the train station? He nods to the baricade, and suggests I ask. Oh. Ok then. Sounds like a plan. I realise everyone is calm (except me). Smiling even. Just waiting.
So I drag my pink case to the line of riot police and peer into a black visor. Both sides of the barricade use a facial cover to protect them from the other. What a weird world we live in. What a bizare way to spend your Saturday afternoon.
I point pathetically to my pinkness, and nod to the train station. He nods back and steps aside. I walk through this army of black and plastic shields, past the armour plated vans, and onto an empty main road. I walk as fast as I can (OK, I ran) until I was away enough to look back. yep. They're all still there. Waiting for the riot.
I'm at the station now. My train's delayed due to a security alert - just like the 'good ol' days'. Except they weren't that good. No matter how things change, sometimes they stay the same.

The girl on the bus.

The girl with no name.

In most cases, having no name takes away our dignity, but this time it gives some.

Gang raped and abused on a Delhi bus, then thrown naked on the street like rubbish, her dignity was stripped along with her clothes. It's right that the world weeps for her pain and her death, but only her family and friends mourn for her. Keeping her name protects her in a way she couldn't be protected that night.

It haunts me. How the last hour of her life was so violent and shocking and sordid and painful and lonely.  Of course I want to see a picture of her, but then I will only imagine the terrible things that happen to her more.  Better her story raises the collective conscience, and not her face. Let her mother gaze and touch her face in the photo. Let her father and brothers and sisters and friends dream of her face. She belongs to them.  But her story belongs to everyone who wants equality and justice and basic bloody behaviour and attitudes towards women.

I have three daughters, all with beautiful, funny, bold, clever faces. As their mum, I am going to do everything to make sure my girls have an equal, strong chance in life. They will know and love their name, and never be afraid to shout it loud. I hope they have courage and kindness, belief in themselves and compassion for others, confidence and charisma. I've no doubt the parents of that girl, who now whisper her name every moment of the day in grief, felt the same way.

I cannot imagine, I literally cannot begin to imagine how they must feel now. A beautiful, clever girl with a lifetime of potential, tortured, abused, and murdered by 6 evil creatures who deserve to have their names said loud and clear when the verdict returns Guilty.

I hold my girls a little tighter. And I say their names a little louder. That girl should have had her name read aloud when she graduated; whispered lovingly when she fell in love; perhaps said strongly when she married; replaced by Mummy when she became a parent. Now her name won't be said, but justice must be done, in her name.  And things must change, in her name. And those men should be punished, in her name. And tonight, girl on the bus, I will think of you, and whisper my daughter's names.
Posted by Mummy mania at 12:32 PM No comments: