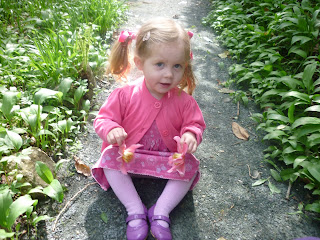 My Precious little Popstar,
You are turning three and although it is your birthday I'm buying for, you are actually the glittering present unwrapping before me every day. No matter how much I peek, or size you up, you always manage to jump out of the box and shout "Surprise!"
In the last few weeks my little baby has become a little girl, and as usual, like most things you do, it's like being hit on the head with a sledgehammer. I've already written about your own personal style (not practising walking with me depsite all my efforts, and then standing up one day and walking nonchalently into the kitchen; refusing all attempts at toilet training until one day you simply announced you were off to do a wee wee on the toilet and promptly did, completely bypassing the potty stage.) You do things your way, and you seem rather amused that I haven't figured it out yet. Last week you took one look at the plastic sheet on the car seat, and quietly removed it with a firm "I do wee wees and poo poos in the toilet now," with a look that told me 'Oh Please Mum, don't you know me by now?'
It seems Mother Nature has a sense of humour. You are my mum's revenge on me. As a child, my mum had an annoying habit of telling me she always worried about my brother, but she never worried about me. It used to annoy me at the time, but now I know what she meant. I was simply very sure of what I wanted, and had no doubts about my abilities to get it. It was just my personality type. And it is yours. But I will be worryng about you - I have no doubt whatsoever I'll discover my 16 year daughter is actually partying on Ibiza while I think she's at Irish school for the summer! But you are all your own self too. Totally self-contained, yet amazingly generous and kind. Since toilet training you now attend Daisy's pre-school twice a week and off you trot as if you'd been going for years. No fear. You never have. We go to the soft play, and you head straight for the big kids' section and whizz down the monstrous slides cackling with glee, while your older sister runs after you terrified for her life, but unable to leave you on your own. She's very protective - she hasn't realised yet there is no need! Despite your little-ness (only reaching 0.1 % on the centile chart) your strength of character is a giant. There may be 99.9% of children your age taller than you, but I suspect there are 99.9% of children your age who won't ever get one over on you. You wear big boots on those little feet, and I have no doubt the years ahead will be full of adventures and excitement (on your part) and stress and sleepless nights (on ours). But I know one thing. Despite the fact you still insist on wearing tights in bed (just one of many of your little foibles) and love your mee mee soother more than life itself, my baby is growing up. Happy birthday sweet sweet girl, and as you unwrap your birthday present I look forward to unwrapping your present to me for years and years to come - the wonder of you.
Love mummy
Posted by Mummy mania at 4:07 PM 7 comments:

Why the Spare Room Saves our Marriage

It seems in most marital folklore, the spare room is the dark dungeon of doom, the place where stroppy spouses sulk, and where only anger and resentment sleep. But I offer an alternative view.

My hubby is an oncologist who gets up at 6.15 every morning and is out of the house by seven before the girls wake up. He leaves work early so he can see them before they go to bed and then works every evening catching up on patient's notes and paperwork. He's busy. He's tired.

I'm on my sixth pregnancy in 5 years (my third baby) and have been pregnant two and a half years of those five. I don't sleep well, not helped by Poppy who decides to visit me at least four nights out of seven - often wearing a tutu. I have no childcare, and as well as looking after them and the home, I try to write magazine articles, blogs and a novel. I'm busy. I'm tired.

So sometimes we need a night off. The spare room in our house is not the Room of Resentment - it is the Bedroom of Bliss. We've never ever used it as a retreat from each other, but we often use it as retreat from the children. It is the Reward Room, the place we offer up to each other as a treat to refresh ourselves and get a good night's sleep. "Why don't you sleep in the spare room tonight?" is one of the nicest things hubby can say to me!

The other day I mentioned sleeping in the spare room to my mum and she raised that ever-expressive eyebrow (I've mentioned before how much my mum can say without actually talking just by raising her eyebrow - I've tried but I just look like someone whose face lift went wrong). "That's not good for a marriage you know," she claimed. I knew better than to argue (merely rolled my eyes - standard response to raised eyebrow - we barely have to talk). But I did ponder it. And as such, I've decided to go public with my findings.
THE SPARE ROOM IS A MARRIAGE SAVER. I'll tell you one thing that's a marriage breaker - Exhaustion, along with its team mates Grumpy, Short-temper and Snappy. If they are not controlled on a regular basis, then the spare room would indeed be used for altogether different reasons. So I just wondered... is anyone else a closet Spare Room User? Does anyone else want to come out and admit that closing that spare room door is the best part of the week?
Posted by Mummy mania at 6:38 PM 11 comments:

There are some wonderful words being bandied about these days to describe modern maternity methods - positive parenting; raise your praise, not your voice; reward not reprimand. All sounds very pretty. All sounds very fluffy. But we all know what it really means. A less pretty word. The golden rule to happy parenting is - bribery.
Now I'm not dishng it. I started Daisy on sticker charts at about 18 months and was amazed how her behaviour changed (to my way of thinking!). Now I have three star charts on the go. Daisy needs 20 stars for eating her meals properly and she gets a small treat from the toy shop. Poppy is working (slooooowly) towards 10 stars for sleeping through the night - all she wants is a Jelly Baby. I can live with that - bad teeth for good sleep - sure isn't parenting all about compromise?? And of course at the moment, we have the potty training star chart - frankly she can have the entire toy shop if we get to the end of that one.
But there are other levels too. I threaten quite a lot (sorry, positively persuade). No TV if I get to three and you are still putting the cat in the washing machine. No Peppa Pig toys for a day if I count to three and you are still biting Daisy's arm off. We can use the right words, or we can be honest. Bribery. Threats. Extortion. I've decided to change my blog name from Mummy Mania. I'm now Mummy Mafia. Now I'm off to make them an offer they can' refuse.
Posted by Mummy mania at 7:36 AM 6 comments:

... and my universe shifts again

I've been changing nappies for nearly five years now. I can change nappies with them standing up, lying down, awake, asleep, in a car, on a floor, on a table. I can change nappies with my eyes open, my eyes closed, talking, cooking, telling a story, or just plain gazing out the window wondering if this is my two millionth or three millionth nappy. So ingrained in my every day routine, it's on a par with breathing, drinking and eating. It's just what I do. Occupation? Nappy changer. Hobby? Nappy changing.

So even though I've spent the last few months cajooling, negotiating, discussing, demonstrating, bribing, pleading and begging Poppy to consider giving up her nappies for the pleasure of pants, and been met with a definite 'NO!', I haven't been able to envisage a world without them.

And then yesterday my world shifted on its axis. Poppy announced she wanted to do a wee wee on the toilet, strutted off to the loo, promptly did her business, wiped and flushed and sauntered out with that look I've come to know so well. The look that says "on my terms, Mummy. On my terms." Two hours later, a poo was delivered with the same aplomb and we haven't looked back since. And just like that I'm living in a nappy free world. I am no longer a nappy changer. (I'm well aware that in exactly 26 weeks and 3 days it'll all start over, but I can enjoy it for a while!). I'm slightly at a loss.

I shouldn't be surprised though at the suddeness of it all. I saw that same look when I was trying to encourage Poppy to walk. She refused. Point blank. Then one day she promptly got up and strolled into the kitchen with a backward glance to my dropped jaw that said with a wink, "Gotcha."

I have a funny suspicion that I'm going to be gotcha'd quite a lot over the next few years.
Posted by Mummy mania at 6:44 PM 7 comments: