So today I felt that parental pain like no other – pain worse than my own, the pain of watching your child suffer. It’s pretty depressing when your child ends up being more heroic than you…

There we were, monkeying around at the zoo, having a whale of a time, when Bang! A wobble, a topple and a thud, and our day tumbled upside down. I knew the minute she hit the floor that Poppy was hurt. Badly hurt. The cry was pitched just that octave above normal, her eyes wide with shock rather than that wide-through-the-crying-look while trying to assess if I was watching enough and needed to upscale the wailing. There was no faking this time.

As I ran with her to the First Aid booth, I knew her arm was broken and the first thing I screamed at the nurse (I’ve given up trying to pretend I’m calm in a crisis) was, “Painkillers! Give her some pain killers!” Naturally enough she did no such thing. But all that time… all those ticking moments that she examined, assessed, asked questions, wrote down details, my child screamed. And while I answered and nodded and gave out my telephone number, I screamed too, inside. “Just take the pain away! TAKE IT AWAY!”

But all I could do was hold her, knowing there would be no pain relief while we waited for the ambulance, no pain relief as we rode to the hospital and no pain relief until she had been poked and prodded by a doctor. A whole horrible, hideous half hour of pain. And it made me want to actually vomit, knowing I couldn’t take it away. But worse was still to come. The X-ray showed it wasn’t broken. Instead, her elbow had popped out of its socket. Turn away now if you are squeamish. I had too. Yes, the doctor took my little 2 year old baby’s twisted arm, pulled it out and wrenched it around until he got it back into position. Poppy hit the roof, and I hit the floor. Hubby had to carry both of us out of the hospital.

Poppy and I spent the afternoon under a blanket on the sofa, recovering. She’s finally asleep now, plied with as much medicine as I can legally give her. I’m not sure I’ll sleep though, no amount of medicine can take away the sickness in my stomach. One painful afternoon and I’m drained. So this is a tribute, a hug, a tip of my cap, a salute to the brave, incredible strong parents who have to do this on a daily basis. To parents whose children are ill and have long term pain. I do not know how you do it.
Posted by Mummy mania at 8:35 PM 3 comments:

Who's a good mother anyway?

Well, not me for starters. So here I am writing a magazine article about good parenting, and as I read through the many emails and blog replies to my survey (thank you everyone by the way), I nod in agreement as people place patience, quality time, sense of humour, creativity and flexibility as the ‘super’ ingredients in the melting pot of parenting. I even tap myself on the back for ticking a couple of the boxes.

And then this morning happened. Trying to get two toddlers up, fed, dressed and out the door by 8.30 is hard enough at the best of times. Add to the chaos, Daisy’s Halloween parade and torrential rain and I was just a smidgen stressed. I hurried them, they harried me. There should be a law against having to face-paint a witch (“with sparkly bits mummy!” ) before it’s actually light outside. By the time we were ready to plunge into the thunderous downpour I was cackling menacingly like the witch I’d just painted on her face. Crackling in an evil, hoarse, shouting, impati 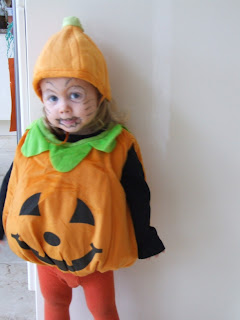 ent, bad-mother sort of way. I even had a couple of moments as a fully screeching banshee.

Daisy wouldn’t wear the leggings under her witch’s outfit and my patience flew out the window on a broomstick, leaving me in the midst of a foot-stamping tantrum. I yelled to the point where she cried. I even slammed a door. I’m pretty sure I didn’t see ‘slamming doors’ on the list of good parenting ideals.

And I realised that maybe the first rule of being a good parent is that there should only be one child in the relationship? We kissed and made up and she was a bright ray of sunshine again before I could even say Abracadabra. But as my little witch (“I’m a good witch mummy”) skipped into school, this bad witch flew home on her broomstick with a sour taste in her mouth… the bitter bile of guilt. 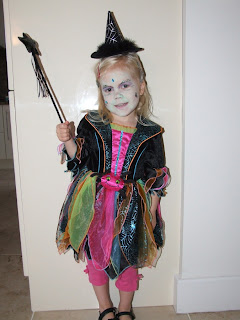 And as I sit down to write my article on what makes a good parent, I realise it’s a lot easier to write about it….. and a lot harder to do.
Posted by Mummy mania at 6:56 PM 2 comments:

A bit like death and taxes being the certainty with life, you can rest assured there are two things we can rely on in motherhood - endless nappies and endless guilt-tripping. The pressure of parenting is palpable - from the magazines we read (who needs to see some celeb emerging with newborn in size 6 skinny jeans, I ask you???) to the school gates where we congregate (often the most bloody of battlegrounds) - we are bombarded with images and examples of how we are supposed to be. But are they realistic?

I'm writng an article for an Irish parenting magazine on the difference between society's perception of a 'super mum' and how we, the actually parents, think.

As part of my little survey , can I be so bold as to ask ye super / semi-super / not super at all parents your thoughts?

Last night my three year old girl – the light that has lit my world since the day she was born – kissed me good night for the last time. It was sad and beautiful.

This morning I hugged my four year old for the first time, and it felt fantastic. It seems like only yesterday I held my breath as I held her in my arms, so awestruck was I at her very existence. Yet in other ways, four years seems like a lifetime, my lifetime before her forgotten, like a murky dream I can’t quite remember.

Only four years of my forty, yet it feels like the other way round. Like all I learnt before would fit into four years, and all I have learnt since into 36. I’ve grown up as much as her, and at times it felt her rising star has shone more brightly in direct relation to my dulling down.

And yet… there are more times her light has shone a beam on me, highlighting a side of me I like better - a kinder, wiser, loving, caring me.

So tonight I will kiss my four year old goodnight for the first time, and see a better me reflected back in the glint in her eyes. We made each other it seems…. So happy birthday to me too….the better me.
Posted by Mummy mania at 6:42 PM 2 comments:

Disaster days are often the best...

I just had one of “those” days. This one was so bad, it started the night before and kept on going. Having had two weeks of broken sleep, hubby finally returned from his various trips and I scuttled off to the spare room for a good nights’ rest. Sod’s law dictated though, that as soon as I snuggled under the duvet, Poppy’s croupy cough crescendoed and I ended up bringing her in with me, thus my sleep-filled night was a snot fuelled fright, and s’not a lot of sleep was had. It was 5am and I was ready for my bed.

We pulled back the morning curtains and searched for the sky, but the sun had put her hat on and marched off to another continent. It rained, it poured and the heavens snored thunderously. And being Dublin - where let’s face it, the rain reigns - no-one can cope and everyone and their dog got into their cars (including me!) and it took twice as long to drive as it normally does to walk, so we were late. But before the road rage there was an epic temper tantrum. Screaming and shouting and stamping of feet (that was me), wailing and crying and screeching (that was Daisy) and by 8.30 I was ready for the hills.

We finally got to playschool and Daisy continued her recent phase of not wanting to stay. Poppy on the other hand cries because she wants to go and doesn’t understand she is too young. So I have Poppy in my arms screaming and holding onto Daisy, who is being restrained in her teacher’s arms, screaming and crying and holding onto Poppy. We tear them apart (my heart along with them) and we finally get the right one to stay and the right one to go. It’s 9.30 and I’m ready for a gin.

I decide to head for Ikea to take half the shopping back from the last visit (I think it’s their marketing magic – you go for one thing, buy 20, take half back, but when you are there buy 10 more things, but end up having to take five back and the cycle continues until you are 90 and can no longer drive, but that’s another blog for another day.) Because it’s raining, it takes me an hour and when we get there (Poppy now trying to get herself out of the car seat in protest) I discover it doesn’t open until 11. I have to pick Daisy up at 12 so I literally turn around and head back to school. It’s 10.30 and I’m ready for retirement.

When we get home, I can’t even give them their usual half hour TV (my crucial half hour switch off) because in the midst of our respective tantrums this morning, I threatened Daisy with no TV today and now have to carry it out. It’s only mid-day and I’m ready for a breakdown.

With the mood inside as dark as the skies outside, I decide to abandon all plans to cook, and clean and write. When the pieces aren’t falling into place, sometimes we just need to figure out the puzzle, so I sat down on the floor with my girls and a jigsaw. We ended up doing 21. Yes, 21! 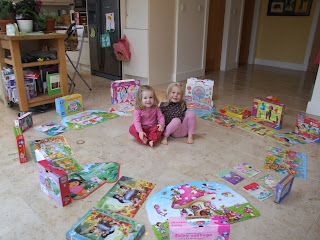 And with each one completed our smiles got a little wider and our moods a little lighter. We talked and laughed and eventually our bad moods lifted. I’ve run myself ragged over the last two weeks trying to do fun things, go to new places (art gallery a DISASTER), and I realised an important thing today. Like the proverbial Christmas present, kids often just want the box. In this case, me. At the end of our jigsaw marathon, I asked Poppy if she was tired. “No. I’m ‘appy”. It’s the end of the day, and I’m ready for that gin, but now, it’s in that “Phew, what a good day” sort of way.
Posted by Mummy mania at 7:04 PM 1 comment: