I've written before about that fuzzy old line that defines (or not) who is the child and who is the parent. In the last four months as my mum lies permanently entangled in her half-life post-stroke, I spoon feed her, change her, wash her and stroke her face, the line has disappeared as my actions mirror exactly those that I perform for my newborn baby. The child and parent in one.

But yesterday the line was broken again by my five year old in that 'slap in the face' sort of way. They say you should never work with animals and children, but I say everyone should have a child's perspective on life kept handy - there is no better way to see the world than through the innocent, uncynical eyes of a child. They have that ability to stand on that box and see inside and out of it. Recently I asked who or what she thought god was. "Is he the police? Because he likes to help people?"

So how do I take her recent golden nugget of observation? I asked her to stop jumping on the sofa and when that was met by a higher leap and a defiant eye I enquired as to who owns the sofa. She slapped that arguement away like a lion brushing a fly off his back with his tail. "Daddy does. He goes out to work. He earns the money. He owns the sofa!"

A very loud silence filled the space between her defiant eye and my horrified face. I decided she could never know the impact of those words. "I own the sofa too."
"No, you do nothing!"
That loud silence was now filled with the cries of sacrifice in my head - I gave up my career for you! I work so hard I can hardly stand some days.. all those organic pureed foods, all those hours of singing Wheels on the Bus, all those days of playing, all those nights of cuddles, ALL FOR NOTHING!!!!!!

Instead I put my sweetest smile on, reinforced with steel, and said in a tone that allowed no misinterpretation of who is the boss, "My sofa. My rules. OFF!"
She deferred to her better judgement and quietly left the room, while I lay stabbed and bleeding by her cutting remarks. That night at 2am, she whispered into my dreams "mummy, I need you" and I lay for a moment, tempted to say, "your dad earns the money, go wake him!" But that would have been childish wouldn't it? Instead, I pulled on my mummy face and cuddled her up and put her back to bed. After all, abject rejection and total confidence annihilation are just part of the (yes, unpaid) job description. But it made me realise that I have to step away from my post-traumatic lethargy of loosing my mum and having a baby at the same time, and reawaken the woman I am - a proud mum, an aspiring novelist and a freelance writer - and get back in the game. My five-year old daughter gave me the pep-talk I needed. The child and parent in one.
Posted by Mummy mania at 11:17 AM 3 comments:

I went to a party this weekend. In London. Not only have I not said those words since about 1986, but the decadence involved of dumping one's children, getting on a plane and booking into a hotel - alone - with one's husband to do something as frivilous as....a party... seems beyond my realm of existence of late. But I just did. So go figure.

No children. No mum. Just hubby and me. Did I mention we booked into a hotel?? Not that I had the faintest idea what to do at such a social event, but I was there.. in a sparkly top no less.

It was a friend's 40th - and as I trawled through my university photos for some snaps to take with me, I stared in wonder at the girl in them and found myself asking - who was she? That 20 year old. Where is she now? For I don't see her staring back at me in the mirror. She is young. Carefree. Eyes alight with anticipation and expectation. The only thing I've been expecting the last six years is babies, and the only thing I've anticipated is exhaustion.

But I went... with not just a little glimmer of anticipation and expectation in my eye (did I mention there was a hotel?) and you know what? I danced. I laughed. I remembered old friends and they remembered me. It's Monday now, and I'm back on the treadmill but today I had a little tiny, itsy bitsy spring in my step. I think I found that girl... if only for a little while, if only for one night. But it's enough to know she's still in there somewhere...
Posted by Mummy mania at 6:45 PM 6 comments: 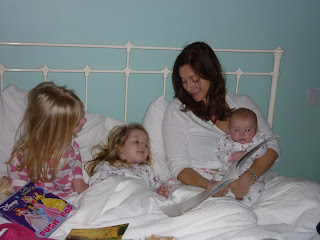 I've never felt so small in my life. Or so big.
After years of believing I'm in control of my life I realise its fragility, and how, in an instant it can all be over. That's what happended to my mum. Literally. One minute she is reading her grandchildren a goodnight story, and moments later...Bam! Something explodes in her head and her life ends. It's just that she's still alive. Since then I'm terrified of my own demise. I lie in the dark and wonder when and how it will happen. I am shattered by the thought of leaving my girls and not being able to stop it. I don't feel like I can conquer the world any more..... more like I'm falling off the edge of a cliff. I feel small in the shadow of all that I do not control. It's a strange sensation and I suddenly dread the forthcoming birthdays, each one closer to my last. The very first blog I wrote was about the sudden accidental death of one of my peers - it was inconceiveable then that life could just end. It is no longer inconceiveable and that makes me feel very small indeed.
And that smallness is making me feel big. Because I can never be that little girl in my mum's arms again. Even as a mum, I have always been able to still be that little girl. Even the night before she left me (for her stroke did make her leave me) I was her little girl when she cuddled me as I cuddled my newborn, reassuring me and making me strong. For that's what my mum did. She kept me strong. And now I am alone. I will have to make myself strong. I have to always be the adult now. I have to finally grow up. Small and big. Big and small. All at the same time.
I have to start being strong. And I'm going to start here. I've been reading back over my early blogs - my life filled with the wonder of womanhood, of writing and the marvel of motherhood. In honour of my mum and all that she taught me, I must live that life again. So for the first time in a long while, I'm writing a story makes me feel good. And strong.
Today Poppy had her first ballet lesson. She's very little and lovely and based on her elder sister's reluctance to embrace new experiences, I wasn't sure which way this would go. I dressed her up in her petite ballet dress and off we set, my nerves wrecked before we even got there. There's something so vulnerable about Poppy, my heart is always breaking for her. I'm still not uber confident about walking into a room full of strangers; how was my little three year old going to fare? Like a little trouper is how. Without a backward glance she joined the group of dancers and proceeded to dance her little feet off. She never hesitated, she never looked lost, she bore a confidence that made my heart swell. After, Daisy (who'd lasted half a dance class last year before refusing to ever return) asked for Popcorn. As I was feeding RubyI gave her the money and told her to go and ask the girl behind the counter. She refused, too shy. 'That's ok' I said. But not for Poppy. Despite the fact she didn't come anywhere close to the top of the counter, Poppy strode off to ask for popcorn. She may be small, but she is unbelieveably big. Small and big, both at the same time....
Posted by Mummy mania at 8:08 PM 6 comments: