Dummy. Soother. Whatever they are called, babies love them and parents hate them. In our house, Poppy called hers her Mee Mee (an indication perhaps of just how personally and emotionally she was attached to it). We have been through the gambit - pink ones, purple ones, little ones, big ones, animal ones, flower ones - and when she got desperate, even the doll's ones! Each morning I would drop it with distain into a cup of boiling water, and each evening little hands would clamber up to the counter (and even little legs would clamber onto a tall stool if I didn't respond quickly enough) to retrieve it.

I've tried everything - bribery, withdrawal, and the cruelest of all - the 'only Babies have mee mee's, you're a big girl' card - only to be told my little independent explorer who insists on being grown up and doing everything herself, is in fact a baby. "But I luuuurve my mee mee mummy." Such plaintive little words would turn my stone heart to mush and I'd give in. Again.

Until now. On the drive back from Donegal I realised I'd forgotten the Mee Mee, left squandering alone in a cup of now cooled water. I took my chance. I kept my nerve. I drove past the chemist where gleaming rows of multi-coloured dummies sat on display. I was going to fight the Mee, and I was going to win.
I kept my jolly face on at all times, as I persuaded poor Poppy that now was the time. And since older sister has become obsessed with the Tooth Fairy of late, we decided that the Mee Mee Fairy was just as generous. We made a card for her - my enthusiastic drawing countered by Poppy's reluctant glueing, but in the end it was done. A sparkling silver card to the Mee Mee Fairy, asking her to take away the Mee Mee from Donegal and leave Poppy a token of her thanks under her pillow instead. As soon as hubby returned from work, I pelted to the shops to buy something beautiful and awe-inspiring and glittering and representative of everything sparkling and gorgeous that the Mee Mee Fairy would obviously be. But 6.30 on a Wedensday night at my local newsagent was not somewhere I think Mee Mee Fairies buy their gifts, so I ended up with a Lego set.
Still, I perservered. Now convincing Poppy to leave her card on the dressing table rather than under her pillow since I knew no lego set was going to realistically fit under there, we had a tearful hug at bedtime, but I pulled myself together and kept strong. Off to sleep my little girl went, Mee Mee-less and sad. I snuck in a few hours later, and left the present on the table, taking the card and putting it in her Treasure Box for reminiscing in years to come.
I felt so guilty. I had taken away my child's comfort. Because I don't like it. Oh, I've justified it to myself - they are dirty, she is three and old enough, it'll wreck her teeth. But still. I felt like Cruella de Ville.
But at 5am, a little hand stroked mine awake. I sat up in bed, groggy and sleepy. "Mummy, Mummy!" came a little whisper. "The Mee Mee Fairy came! She came! She left me a present!" And so I struggled out of bed to investigate, and lo and behold she had. I pulled Poppy off her sleeping sister, quite sure Daisy would not appreciate a 5am call to play and convinced her to return to bed. But at 7am, the lego was dragged in and has been the only thing played with in three days. The Mee Mee isn't quite forgotten, but we're beyond the stage of me running to the 24 hour chemist to get a good night's sleep. Another step on the road to being a 'big girl' has been achieved. So why do I still feel like the Wicked Witch of the West?
Posted by Mummy mania at 4:30 PM 2 comments:

creepy crawlies and all things nice.. 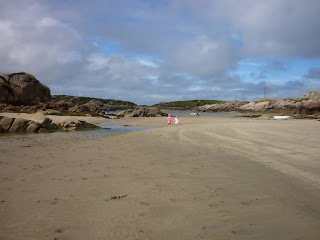 I know I've written about the wondrous wilds of Donegal before. How the light shines in such an extraordinary way, as if the sun and clouds are dancing with each other; how the beaches are more spectacular than any tropical paradise I have been too - and empty; how the air energises you to your very bones and then just at the right time tires you to those same bones so you sleep like the dead, the grateful dead.
I know all this, yet everytime I come back it takes my breath away, the knowledge returning to understanding and my amazement renews itself and I remember why this is the most beautiful place on earth. Even my girls somehow know with their young years that this is what life is really about. Endless, too short hours running on sand, wind ripping our hair, sun competing for affection on our skin, rockpools bursting with wonder and life and adventure and untold discoveries.
Motherhood is momentous - so many roles and feelings and skills and jobs rolled into one delicious word, "Mummy!" It gets said a lot in Donegal.
"Mummy come and see this!"
"Mummy, what's that?"
"Mummy, can I touch it?"
"Mummy, I want to stay here for ever!"
Today I took on the role of David Attenborough, the great knowledgeable master of the animal world. Today we saw 3 stages of tadpoles and caught a frog, we picked caterpillars off the leaves and saw chrysalis and butterflies - we even got to see one of nature's best shows - a butterfly emerging from a chrysalis, we found starfish, and caught crabs, we poked jellyfish and we ran from the fast incomng tide. Today I was an encyclopedia, and my girls learnt about the wonders of life.
This is what Donegal is also about. Beautiful skies. Gorgeous beaches. Luscious air. And most of all - life and living.
Posted by Mummy mania at 6:53 PM 2 comments:

One of the loveliest - and funniest - things about children is their honesty..... although it can be a little brutalising! Recent raw rantings from my two include:

To my mum, who is rather sensitive about her thinning hair, Daisy declared:
"Nanna? I can see your head through your hair!"

She was then accosted by Daisy's best friend Mia: "You are a very old lady. But I like you!"

Being pregnant, it was only a matter of time before Poppy announced "You are fat!" This is a slight improvement on last summer when I was sunning myself in the garden when Daisy started pointing at me and counting, 1,2, 3, 4. I asked her what she was doing....
"Counting your rolls."

It's tough being a mum. I was recently sent off with my tail between my legs after being informed, "You are not pretty today." (Apparently I made the mistake of wearing blue jeans - these are unacceptable in the world of pink dress wearing daughters.)

And today, in a pique of annoyance at not being allowed another bun, Daisy stamped her foot and said, "You are HORRIBLE! I'm going out to dance in the rain!"

And she did. So I did what any self-respecting fat, ugly, horrible mummy does - I joined her and danced in the rain too. That got a lovely "I love you mummy" so all was well with the world again.
Posted by Mummy mania at 6:48 PM 4 comments: